The Supreme Court is on the hunt for judicial assistants

The Supreme Court is looking to recruit a fresh batch of judicial assistants to help lighten the load of its hardworking judges.

The coveted one-year placements see successful applicants join justices in court, carry out important research and draft summaries of often complex judgments for both the press and public.

Like in previous recruitment rounds, the Supreme Court says aspiring judicial assistants must be a solicitor, barrister or advocate qualified in one of the UK jurisdictions, who have completed a training contract or pupillage by the start of the appointment.

It goes on to say candidates wishing to be considered for the roles, which come with a salary of £36,500, should demonstrate a “high intellectual and analytical ability, incisiveness and work well under pressure”.

Tom Westwell, who has been Lord Wilson’s right-hand man since September 2019, commented: “I’ve thoroughly enjoyed my time at the court so far. It has been a great privilege to be Lord Wilson’s judicial assistant: he has not only given generously of his time, energy and wisdom but has also made the job a lot of fun. Our daily meetings to discuss ongoing cases have been among the highlights of my role.”

LAWYER EVENT: How to follow your dreams outside law while still working as a lawyer — with A&O Peerpoint: Find out more

“I’ve also relished working for the other justices on discrete tasks, attending judicial meetings to consider applications for permission to appeal, and seeing skilled advocates in action during hearings. To add to all that, in my fellow judicial assistants I’ve got to know a wonderful group of bright, friendly and committed people and the same can be said of the whole team at the court. If you’re thinking of applying, I’d strongly urge you to do so: you won’t regret it!”

Last year the social media savvy folk over at the Supreme Cout provided a glimpse of what life is like as a judicial assistant through a series of stories on Instagram (pictured below). Those interested in the eleven temporary posts have until 30 March 2020 to apply. 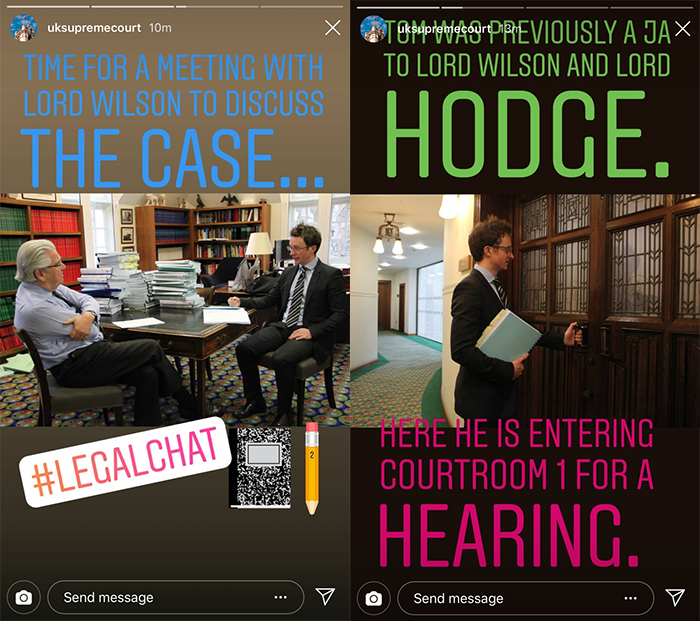