Last December the Solicitors Regulation Authority unveiled its new Digital Badge, a logo law firms can display on their website to announce their regulated status.

While it received a largely negative reaction, the badge represented something else – it was the first time that the SRA had allowed firms to use its logo in any capacity.

A few years ago, I criticised the SRA for preventing firms from using its logo. Logos are such powerful icons of identity and recognition that this felt like a missed opportunity. Wider use of the logo would help to raise the profile of the SRA and regulation, and the benefits this regulation brings to clients.

It is also in the interests of regulated practitioners to make the public fully aware of what regulation entails. Trust is vital in legal services, so anything that offers protections and guarantees to a potential client is certainly worth shouting about.

Yet it felt like all we could do was whisper it instead; a few mandatory lines of small print and an SRA number, all tucked away at the bottom of a letter or email. 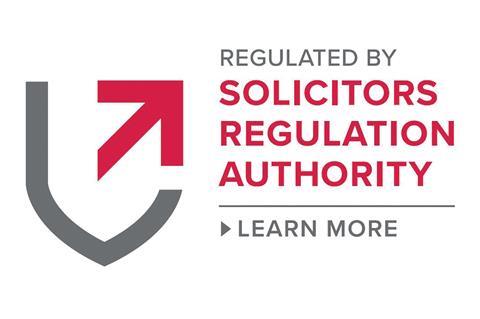 So far, so good. The badge both verifies regulatory status and informs those curious enough to click it why this is a good thing. But does it go far enough?

The answer lies in the SRA’s FAQs on the badge: ‘Q12. Can I use the badge on other channels/materials, for example printed materials or emails? No, the badge can only be used on your website.’

It seems the SRA remains stuck in its incomprehensible way of thinking.

To meet these objectives, the SRA needs to heighten public awareness of what it is. Introducing the Digital Badge to websites is a good first step, but why restrict this to the online world only? Legal services are increasingly being sought online, but it would be ridiculous to say that this is the only way in which clients do so.

It appears that the SRA is against allowing the logo in other forms due to the verification software behind the badge. As this software will only work on websites registered with the SRA, it is adamant that the badge and logo should only appear in that form.

However, this places far too much importance on verification, especially as even the Digital Badge system itself is far from flawless in this respect.

Before getting on to that point, it is worth highlighting those who are most affected by this policy. Most firms with any interest in displaying the SRA logo on printed materials, for example, would be regulated firms wanting to advertise their status to inspire confidence in potential clients. Banning the use of the logo beyond the Digital Badge inconveniences regulated firms and restricts greater proliferation of the logo and SRA awareness.

Out-and-out fraudsters are not going to care about the legal niceties of whether they can use a logo or not. You only need to scan the SRA’s scam alerts page to confirm that.

As to the shortcomings of the badge verification system, there is little to stop fraudsters or any unscrupulous unregistered firm from copying the logo. A screenshot of another firm’s badge would do it and the logo itself is not difficult to digitally recreate. True, there would be no current date or much-vaunted verification software with a counterfeit Digital Badge, but would this be immediately apparent? The public are barely aware of the SRA’s existence, so how will they know that the only valid badges are the clickable ones?

It is ironic that the SRA’s logo restrictions, born from fear of misuse, make the system more open to misuse. Without awareness of the legitimate system, even simple ways to circumvent it will be more effective.

Instead of restricting the logo’s use, the SRA should encourage firms to use the badge through other channels and link these in with the badge system. While this may not be possible directly, a prescribed form for ‘non-Digital Badge’ logos could be adopted.

These logos could include brief instructions on how to verify regulatory status. For example, some words to the effect of: ‘Verify at [website address]’. As the badge is soon to become mandatory for all websites of regulated firms, it could then be used as the next step in verification. Not only does this leverage the Digital Badge’s verification software, it encourages and enables greater recognition of the logo in a variety of situations, and provides an easy way for interested clients to find out more.

Another alternative might be to include QR codes in a non-Digital Badge’s prescribed form. This could aim to tie in closely with the online system, or even just take the client straight to the Digital Badge on the firm’s website, allowing them to verify regulatory status from there.

Opening the system up for regulated firms in this way would lay the groundwork for building a clear, recognisable and verifiable SRA regulation mark. This would not replace the required ‘authorised and regulated…’ text or the SRA number – it would augment it. Logos are much more immediately and powerfully recognisable than a few lines of small print. Keeping that power unused, or only partially harnessed, makes no sense.