Home » Legal Help » Following the footsteps of the first | Feature

Following the footsteps of the first | Feature

106 years after the courts told would-be lawyer Gwyneth Bebb she was not a ‘person’, Catherine Baksi takes a walk with her granddaughter

To mark the centenary of the Sex Disqualification (Removal) Act 1919, the First 100 Years project and Walk London With Us created the first guided walk of key locations significant to the lives of many of the pioneering and remarkable women in the law, and marking their legal ‘firsts’.

One of the guides is Anne Tickell, the granddaughter of Gwyneth Bebb, who with three others in 1912 took the Law Society to court in an unsuccessful bid to get women admitted.

In her retirement Tickell became a guide for Walk London With Us. Leading a walk about Virginia Woolf she started talking to one of her party, Lucinda Acland, who has been recording podcasts and interviews for the First 100 Years.

‘I asked if she knew of my grandmother, and she suggested that we do a legal walk in collaboration with the project, which I thought would be rather fun,’ says Tickell.

‘I wasn’t really aware of my grandmother’s legacy until the last year or so. I have learnt so much about her in the last few months.’

Tickell is the daughter of Diana, Bebb’s first daughter, who was born on 23 December 1919 – the day the Sex Disqualification (Removal) Act 1919 received royal assent.

‘My mother’s father died when she was only 10,’ Tickell says. ‘Despite being a lawyer he left no will, but on a scrap of paper he left a note saying that his daughter should be looked after by a cousin.’

None of that family had known his wife Gwyneth closely and, Tickell laments: ‘I didn’t talk to my mother about her mother.’

Reflecting on her grandmother’s story she says: ‘The most extraordinary thing I think is that my grandfather [Bebb’s husband] was willing to allow his wife to pursue her career and take the case. She had his full support, which at the time would have been astounding, and he was prepared to let her be more impressive than he was.

The most extraordinary thing is that my grandfather [Bebb’s husband] was willing to allow his wife to pursue her career and take the case… he was prepared to let her be more impressive than he was.

‘I feel very proud of her, but sad now knowing what made her tick. I think she was a shy woman. They were of the suffragist not suffragette movement – they just wanted to quietly be allowed to get on with their lives and do their jobs.’

And so we start, with the help of our guides, ‘meeting’ the area’s pioneering women along the way.

In a light drizzle our party walk the short distance from Chancery Lane underground station to South Square, Gray’s Inn, where we meet Bertha Cave, who in March 1903 became the first student to apply to an Inn with the express purpose of being called to the bar.

While the benchers were initially receptive to her application, Master Mattinson said the matter should be referred to a committee, which concluded it was not in the power of a single Inn to decide to admit women as students.

Cave, who was the daughter of a domestic servant who rose to become butler to a Conservative MP, appeared in person before the House of Lords to appeal the decision. There was no written rule against the admission of women, but the judges asked her to provide precedent that they could admit her.

In the same year the suffragette Christabel Pankhurst and Ivy Williams applied and were also refused, though in 1922 Williams became the first woman to be called to the bar.

Cave was never admitted to the bar. Law’s loss was science’s gain: in 1920 she was elected a fellow of the Microscopical Society and emigrated to Nova Scotia, giving her occupation as bacteriologist.

Mary Selina Share Jones had a law degree from the University of Liverpool. She was admitted on 27 January but was never called to the bar and qualified as a doctor.

Edith Hesling was admitted on 4 October while studying for a law degree at the University of Manchester. She was the first woman called to the bar at Gray’s Inn (on 13 June 1923) and became the first woman to sit in the county courts.

(Mary) Robina Stevens, who was studying at London University, was admitted on 8 October and called on 28 January 1924, three days after her 21st birthday. She had passed her final exams the previous year but had to wait until she reached 21 to be called. In 1927 she married a member of the Inner Temple and ceased to practise. She died aged 48 in a riding accident.

She was also the first woman to lead in a murder case. In 1950 she defended George Kelly in the infamous ‘Cameo cinema murder’. This caught the attention of the press and led to the Daily Mirror naming her ‘Woman of the Year’.

In 1974, Heilbron became the second woman High Court judge, after Elizabeth Lane. Despite her expertise in criminal law, she was assigned to the Family Division.

We jump forward in time to meet Lady Hale, who in 2017 became the first woman president of the Supreme Court.

She graduated from Cambridge in 1966 and taught law at the University of Manchester while also practising as a barrister, specialising in family and social welfare law.

In 1984 Hale was the first woman to be appointed to the Law Commission and also began sitting as an assistant recorder. She went to the High Court in 1994 and was promoted to the Court of Appeal in 1999. Five years later she became the first female Law Lord.

Dame Linda Dobbs lays claim to a different first. Born in Sierra Leone, Dobbs studied at the University of Surrey and was called to the bar in 1981. Following a successful career, in 2004 Dobbs became the first non-white High Court judge in the UK – an experience she describes as ‘absolutely terrifying’.

The only ethnic minority judge on the bench for another seven years, she remembers feeling ‘lonely… not one of the chaps… like you don’t fit in’.

The walking party passes through Lincoln’s Inn, past legal book shop Wildy & Son, which has been either side of its famous archway since 1830. We come to Chancery Lane where we are introduced to Eliza Orme, who in her late 30s in 1888 was the first woman in England to earn a law degree – from Bedford College. The first Women’s University, Bedford opened in 1849.

Before she received her degree Orme was unofficially ‘practising’ law from an office on Chancery Lane. She and a colleague prepared the paperwork for property transactions, patent registrations, wills settlements and mortgages – the only legal work open to women.

A modest, down-to-earth woman, she is said to have described herself as ‘a sound-minded woman, the type to wear ordinary bonnets and carry medium-sized umbrellas’.

Next we meet Dame Elizabeth Lane, the first woman appointed as a judge in the county court who in 1965 went on to become the first female High Court judge in England. Born in Cheshire in 1905, Lane had no formal university education and got into law while helping her husband with his legal studies. She passed her final examinations in October 1939, was called to the bar in 1940 and took silk in 1950 – only the third woman to do so.

Lane was appointed the first woman commissioner of Manchester Crown Court, where she was addressed as ‘My Lord’, and referred to in the official calendar as ‘Mr Commissioner, Elizabeth Kathleen Lane QC’. 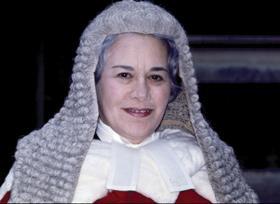 We are now outside the Law Society at 113 Chancery Lane. In 1912 four women applied to the Law Society to take the preliminary exams to become solicitors. The Society rejected their applications because on the meaning of the Solicitors Act 1843 women were not considered to be ‘persons’. Their judicial review failed, but the case helped pave the way for the legislation that followed after the war.

In 1950 Heilbron defended George Kelly in the infamous ‘Cameo cinema murder’. This caught the attention of the press and led to the Daily Mirror naming her ‘Woman of the Year’

After the act was passed, Bebb decided she wanted to go to the bar and was on her way to becoming the first woman barrister when she died in 1921 due to complications during childbirth.

We press on to the Royal Courts of Justice to learn about two amazing women who became judges. Born in Liverpool, Lady Justice Arden studied law at Girton College, Cambridge and Harvard, and was called to the bar in 1971. She went on to become a High Court judge and in April 1993 was the first woman to be assigned to the Chancery Division.

Her husband joined the Queen’s Bench Division in October the same year and the couple became the first married couple to sit in the High Court. They both went on to sit in the Court of Appeal and, in June 2018, Arden was appointed to the Supreme Court, replacing her husband on the bench.

We also meet Dame Elizabeth Butler, who in 1988 became the first woman at the Court of Appeal and was known as Lord Justice Butler Sloss.

We cross Fleet Street, where Middle and Inner Temple sit side by side, their gardens stretching down to the Embankment. Two days after the Sex Disqualification (Removal) Act 1919 became law, Helena Normanton joined Middle Temple and became the first woman to join an Inn of Court, before becoming the second woman called to the bar (after Ivy Williams) in November 1922 and the first to actually practise at the bar.

In January 2019, 218 Strand Chambers changed its name to Normanton Chambers in her honour. 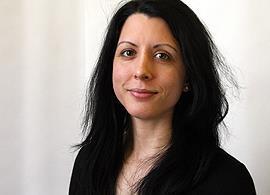 Unusually for the time, she preserved her maiden name to maintain her professional identity and became the first married British woman to be given a passport in her maiden name.

Outside 4 Brick Court in The Temple we are introduced to Barbara Calvert. She was called to the bar in 1959 aged 35 at a time when only around 4% of barristers were women. In the 1970s, increasingly concerned about the number of young people who were unable to get a place in chambers, Calvert set up her own – becoming the first female head of chambers (which she recalled became nicknamed the ‘Monstrous Regimen of Women’).

Calvert’s near-contemporary Dame Barbara Mills took her bar exams three weeks before giving birth to her first daughter and was called to the bar in 1963. After working in private practice she was appointed director of the Serious Fraud Office in 1990 and in 1992 director of public prosecutions.

By the time she was 30, she had four children, and when the local nursery was due to close, she decided it could be run from the basement in her home – at its peak it catered for 24 children.

These were just a few of the amazing women we encountered on our walk in the rain through legal London. The hope is it will not take another 100 years to achieve genuine equality – attaining that goal will also mean this guided walk will take longer. As Tickell notes: ‘I have enjoyed finding out about my grandmother and the other women in the law – the difficulty is getting all that fascinating information into just a two-hour walk.

Catherine Baksi is a freelance journalist

Guideline hourly rates: out of the deep freeze | Feature