Home » Legal Help » 100 years of women in law: a timeline of sexism and equality | Feature

100 years of women in law: a timeline of sexism and equality | Feature

There has been seismic change towards the acceptance and equality of women in the work place. Significant dates have led the way for later transformational legislation that has changed the lives of women in the UK to the level of equality now experienced.

Collectively, the changes to employment law have been remarkable. We have come a long way.

Eliza Orme was one of the first women to obtain a law degree in 1888 and qualify as a lawyer. What has changed in the last 100 years to enable progress for women, in legal and other professions?

In 1919 a landmark Act came into force, the Sex Disqualification (Removal) Act in 1919 (‘the Act’), which was revolutionary and transformational. The Act meant it was no longer only men who could become lawyers, barristers and magistrates. It wasn’t until the introduction of the Act that women were permitted to take their solicitor examinations and qualify. This change started the long battle women still have with equality. The Act was not without its limitations as judges were able to appoint all male juries and not allow women in the foreign and diplomatic service. The Act was only passed to prevent the Women’s Emancipation Bill, which would have permitted women an equal footing in terms of being able to vote and sit in the House of Lords along with the principals of the Act.

Following the Act, equality was only possible for those determined enough.

Some 51 years later – thanks to the brave women of Dagenham’s Ford – employers were forced to pay men and women equally under the Equal Pay Act 1970, preventing employers from giving higher salaries to men for like or equal work.

A five-year wait saw the introduction of the Sex Discrimination Act 1975 (SDA 1975). This made it unlawful for women (or men) to be treated less favourably because of their sex. Interestingly the primary role of the SDA 1975 was to prevent banks requiring women to provide male guarantors when applying for a credit card or loan, regardless of her income/earnings. On a lighter note, it meant women could be served equally at wine bars. Women could also own their own property and apply for a mortgage from lenders who had only dealt with men.

Women were permitted maternity leave and prevention from discrimination for being pregnant. It is paining that until the introduction of the Employment Protection Act 1975 it would have been permissible for women to be dismissed/discriminated for taking time off to care for their baby.

In 2010, the Equality Act came into force which takes on the continued fight for equality, setting out parameters in which women (and men) can seek judicial support if they are not being treated/paid sufficiently.

The final piece in the legal story is the introduction of the Equality Act 2010 (Gender Pay Gap Information) Regulations 2017. Employers with 250+ staff were forced to report salary figures for their male and female employees. April 2018 showed a 17.9% pay gap. In April 2019 78% of companies overall had a pay gap in favour of men. This has applied pressure on employers to prevent discrimination in the workplace. Sadly women in some professions are still paid less than their male colleague equivalents.

In 2019, the statistics between men and women remains unbalanced with women earning on average 9.1% ph. less or £1.32 ph. less than men. 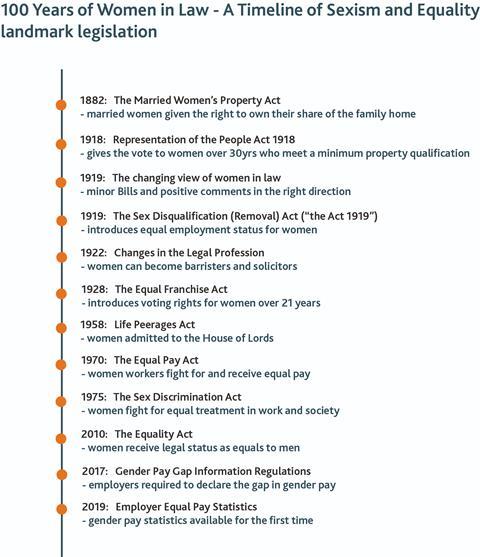 Thankfully women are now more outspoken and confident about addressing topics relating to equality and no longer considered ‘home-breaking activists’ or ‘angry feminists’. Women are now in more leadership roles. A woman at the helm should not be something out-of-the-ordinary, but seemly is still an unnatural act for some companies.

It’s been a hundred years since the Act and still only 25% of top tier law firms are made up of women. Does this answer the question?

Is this about to change? Recent statistics show 63% of newly qualified lawyers are women. Will men soon start to experience the pinch of female competition and have to match the talents of female counterparts for career advancement?

An interesting concept to consider: Are employers too worried about equality that their policies over-compensate in favour of women? Will women overtake?

We must remember the women who faced and overcame discrimination and adversity, and not take our current progress for granted. We must also be kind to our male colleagues, for fear that, left unchallenged; women could evolve a discriminatory attitude towards them.